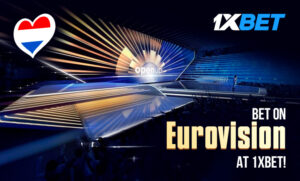 You can make money by watching the Eurovision final and betting on your preferred winner on 1xBet. Here’s where to place your bet.

On May 22nd, the long-awaited Eurovision final will take place. Unfortunately, Europes’ favorite song contest didn’t take place last year, but this year participants will finally delight the audience with their performances.

According to the competition rules, all performers who were supposed to participate in Eurovision 2020 could compete this year – but with different songs. However, if they so wish, a participating country could send another representative to Rotterdam instead. For example, this happened with Italy and Russia.

Who is the leading contender to win the competition, and who should we bet on? The 1xBet analysts have identified the favorites.

Here are the top picks.

From the start, the Italians have been among the favorites of bookmakers. They were initially predicted to be in the top five, but now they’re expected to win. The Måneskin group conquered everyone with their flashy performances at Eurovision rehearsals and became the main contender for victory.

What’s so special about the band? Well, to begin with, they brought a rock song to Eurovision – not many contenders have enough courage to tackle this genre. Secondly, as they say in their composition Zitti e buoni, they may be “crazy, but not like everyone else”. All members of the group are very charismatic, the song is immediately engraved in memory, and the show is enthralling. We are waiting for the finale to see it live!

The performance that France is preparing to present is the exact opposite of the Italian pyro show. No special effects are planned. On stage, there is only Barbara Pravi, solo performing her own composition Voilà.

The girl’s performance evokes memories of Edith Piaf – the legendary French singer – and the audience really likes it. Barbara’s song itself is an authentic “self-portrait”: an intense and soulful composition revealing the tender soul of the singer. The girl gives her all on stage, is always honest with her listeners, plus asks them to see and love her for who she is.

Will France be able to achieve a kind of double and, in addition to the Junior Eurovision Song Contest, win the adult competition? If you like the emotional composition from Barbara, you can bet on it at 1xBet with excellent odds.

The Maltese have chosen 18-year-old singer Destiny as their representative at the Eurovision Song Contest. She will perform an emotional song entitled Je Me Casse (“I’m leaving”). Her daring act is very similar in style and message to Netta’s performance at Eurovision 2018, which brought Israel victory in the competition. Then, the song exclaimed “I’m not your toy”, and now Destiny echoes her with the words: “I’m not your baby!”.

The energy of the Maltese is transmitted to the listener, and you want to dance as soon as the saxophone begins. The girl encourages everyone to love themselves and put their desires and plans at the forefront of any relationship – of course, the public loves such a message. If you believe in Destiny’s success, you can bet on the Maltese at 1xBet.